Ever spotted a happy person with mobile email?

No? Neither have I. You see loads of people in London with Blackberry and Nokia email phone, but typically you see them reading something followed by a long sigh. I think this comes down to email typically being a more involved interaction where more information is usualy exchanged than most people want to deal with on the move. Also many people really misuse email communication as a whole, as though sending an email to somebody means they now have to jump your commands. Reading through an email conversation on a mobile is not an enjoyable experience. If you have ever received many emails from people with a Blackberry you tend to get a short response, so should you really be sending shorter messages to people with a Blackberry? It feels like we need something between the length of a traditional SMS and the never ending email conversations. Perhaps when people are more online with their mobile conversational applications such as twitter and jaiku will find a role within a business environment. I also believe if you really want somebody to do something for you, there are better mediums than email, perhaps an email just to point them to a task list or application might be as far as I would go. As you might have guessed, I am not a fan of email, I dont often have great experiences with email. You either get a conversation that would be better done over IM or in person or you get one liners that could work better as a text message.
Posted by Alex Craxton at 7:14 pm

If you have been on the tube in London recently you will probably ... no ... you will not have been able to miss the adverts for Windows mobile everywhere and anywhere. I cant believe Microsoft have gone and done it again, selling their platform as an extension of the office. Missing the idea of it being a personal device. Dont they get where mobile has been and where it is going? I think somehow they want a piece of the Blackberry 'people' market. Remember the apple advert sneering at microsoft ... just feels they didnt get the jibe Apple were getting at ...

So here is an interesting challenge, go to google and type 'microsoft mobile' or 'windows mobile' and see what you get. First link ... tells me a lot about where they are targetting their mobile products right now.
Posted by Alex Craxton at 7:08 pm

And so the final stages into Alpha

As blogged before, the website for Mobile Monday London is nearing the stage where it will go into a closed Alpha. We are going to attack it from a user experience angle so that we can be sure that it will serve our community now and into the future. It will hopefully be released into a public Beta for our community before the summer gets going (to hold me to that) and we are now putting together a roadmap of features it has now and some milestones over the next year, looks to be an exciting future for it.
Posted by Alex Craxton at 11:52 am 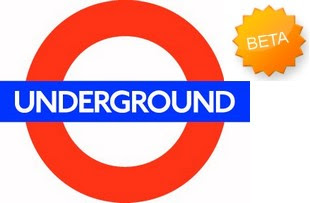 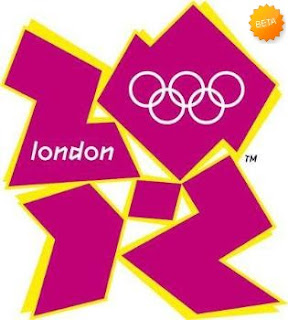 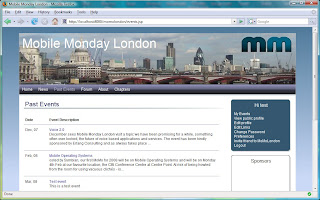 I have been working on a new website for MoMoLondon over the past couple of months (when I have time to code) and here is a sneak preview (click on image):

It still needs a designer to go over the layout and images, a web developer to clean it up but the basics are now in place ready for some closed testing. If anyone is willing to host a simple JSP/MySQL site for MoMoLondon then please contact me directly (info on right panel).
Posted by Alex Craxton at 11:12 am

Mobile saw the end of a busy weekend of mobile industry activity in London with MoMoLondon's User Expereience. Considering quite a few from OTA had turned up people were engaged by a really good speaker lineup and an open invitation for sponsored places at MEX from Marek. We showed a couple of demos and did a quick review of the weekends activities. We have had some great feedback from the community on both events so hopefully we will be doing similar next year (dont hold me to that!).

Had to put this on the blog, its Phone Phight, written by Lastminute labs overnight at Over The Air ... (spot Tom cheating with an early jab) ...

... and OctoBastard from the Future Platforms folks ...

And finally just before the demos at Over The Air, here is a quick video sweep of the audience ...

Over the air, in the press

Another update on Over The Air (will keep adding to this), now I have caught up with emails, blogs, twitters, life and so on, here are some interesting articles/reviews I have found on the weekend event ...

The Register (little mention of Mobile Monday London in there, damn)
Guardian
BBC Backstage
BBC World - Digital Planet (about 20 minutes into the report)

And from the blogsphere

Question is, where were the rest of the technology press, they knew it was happening and many were invited along, perhaps there are too many events on at the moment and they are stuck at Heathrow T5 or something?
Posted by Alex Craxton at 3:01 pm

Slideshow of Over The Air

Just thought I would put a flickr slideshow covering the 2 days of Over The Air ... enjoy

And now to Mobile Monday London

Well Over The Air is over and thoughts already turn to monday's event on Mobile UI. Dan Appelquist will do a quick review on summing up the weekend, probably in a 'its been emotional' fashion :) ... but in all seriousness we have a great line up as always so hope to see folks there.
Posted by Alex Craxton at 7:50 pm

Well Over The Air is now over, and a great end to the day with some really interesting demos that were hacked together over the last 24-48 hours (quite a few of them over night). One was a mobile app to help mix cocktrails, one was a sword fight with bluetooth, another was virtual fridge notes and so on. I was really enthused and educated about mobile over this weekend, so I take away a lot. Unfortunately the hack I put together didnt work when we demoed it on stage (god damn demo demons) and we ended up with the 'most over engineered' award (wahey!) for probably an over complicated demo, although my hack was 10 java classes ... but we had some great feedback so the tiny idea might one day blossom into something else. I am not disheartened, it was a 4 hour hack and with the great help of Betavine we got something nearly there in time ... I havent done anything like this before and it was although nervy, was quite enjoyable.

Huge thanks go out to all of the organisers of Over The Air, I wont pull anyone out in particular as there are more people than I can mention here and it would be unfair to thank just a few of them. At Mobile Monday London we are going to review the conference and see how we can improve and streamline the event as there is interest to run a similar event abroad and no doubt they will benefit from some wisedom you only get by going out and doing this type of thing.

I hope that some of the demos I saw today I will see in some fashion in the not too distant future as they show great ideas can be prototyped into something in a short time. I would like to think one of the apps might make it as a demo in a future Mobile Monday London.
Posted by Alex Craxton at 7:40 pm